Cameron Swanson brings the Ferguslie Mills—a glorious industrial structure, and surrounding architecture and walkways—back to life in this amazing animation. 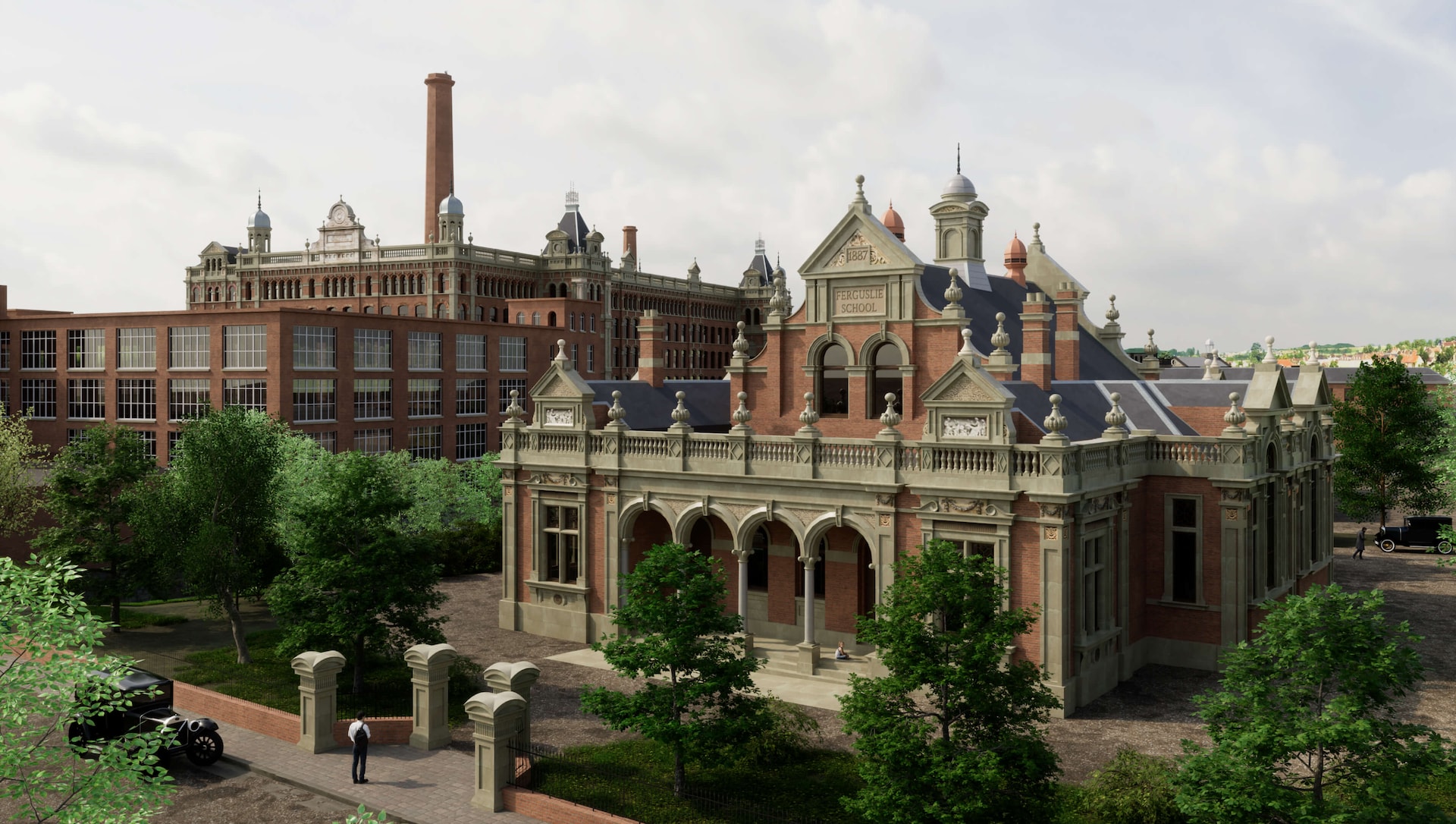 Image courtesy of Cameron Swanson
Paisley is a Scottish town with an immense industrial heritage; it was home to a sprawling thread mill, Ferguslie Thread Works, that has since been demolished, with the mighty No.1 Mill coming down in 1992. Now that huge, complex structure, and surrounding architecture and walkways, has been brought back to life digitally in a heritage visualization project by a local artist Cameron Swanson.

Cameron’s love of 3D began as a hobby 12 years ago, when 3D Warehouse enabled you to upload models to Google Earth. “I have a real interest in architecture and history,” says Cameron. “And I wanted to combine these interests to create historical reconstructions.” He embarked on a personal project that took him about nine months to complete, alongside his full-time job working as an R&D engineer within the manufacturing sector, specializing in 3D scanning and visualization. 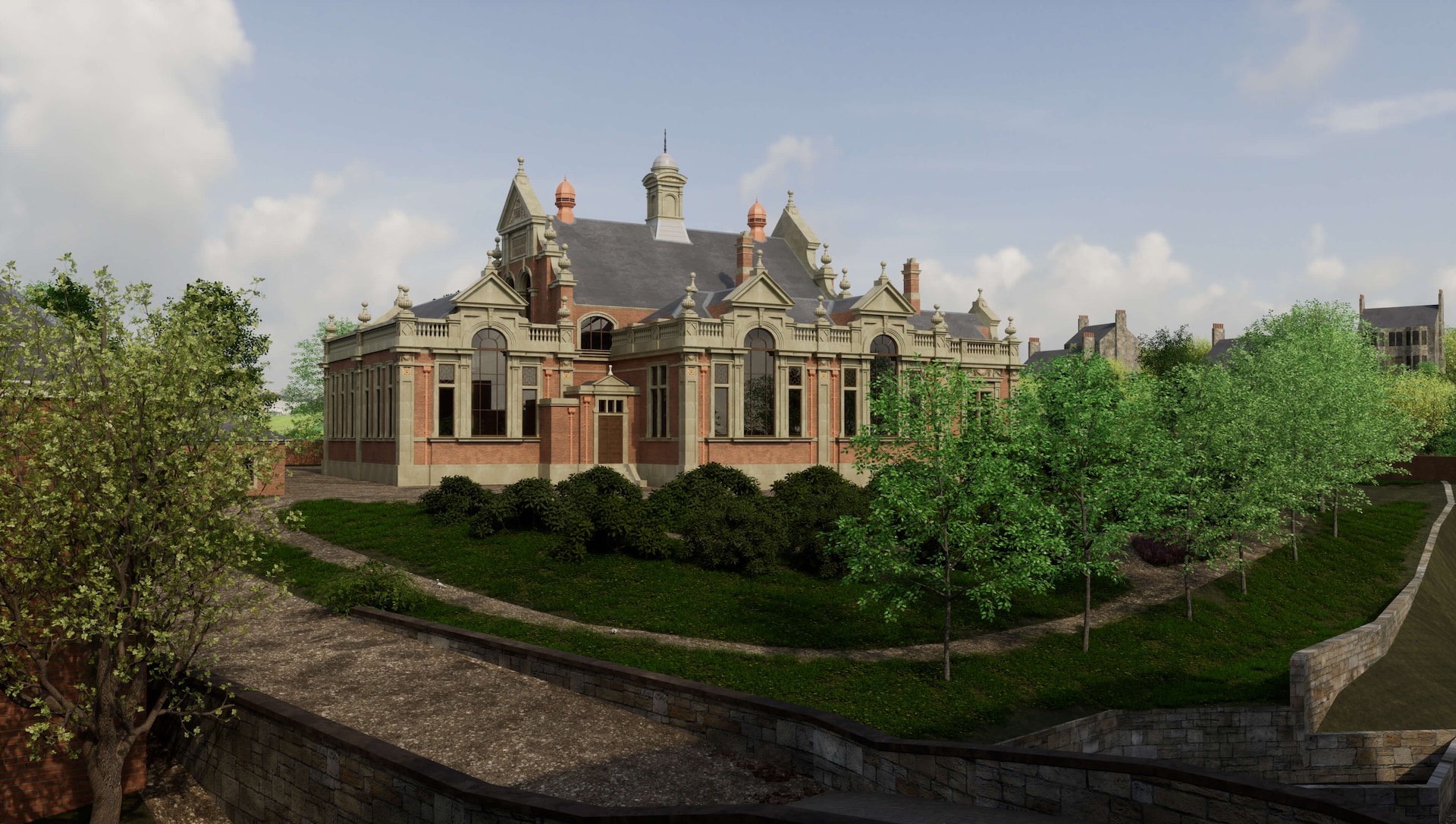 “The Ferguslie Thread Works, operated by J&P Coats, were the largest mills in the town and employed many tens of thousands during their lifetime between 1826 and 1984,” Cameron explains. “I was born in the 1990s and had only seen some grainy images of these vast mills that touched the lives of almost every single person in the town. For a long time, I had wanted to do historical reconstructions of old Paisley, to get a better sense of the town as it was before mass demolition from the 1960s onwards.”

Cameron’s digital reconstruction of the Ferguslie Mills required a lot of groundwork. He painstakingly created it using hundreds of photographs, maps, drawings, and photogrammetry scans, and a number of different software packages. As a first step, Cameron contacted a local charity, The Paisley People’s Archive, who helped him to get all the reference materials he needed to create a faithful rendering of the mills, giving him access to a huge collection of images, as well as details on the buildings on the site.

The data from the charity proved invaluable; Cameron was able to use it to do further research to make the visualization as accurate as possible: “There were many thousands of images of the general views of the buildings, but very few of carvings, stonework, and such. I spent a lot of time researching the architects and architectural style to represent these details,” he says. 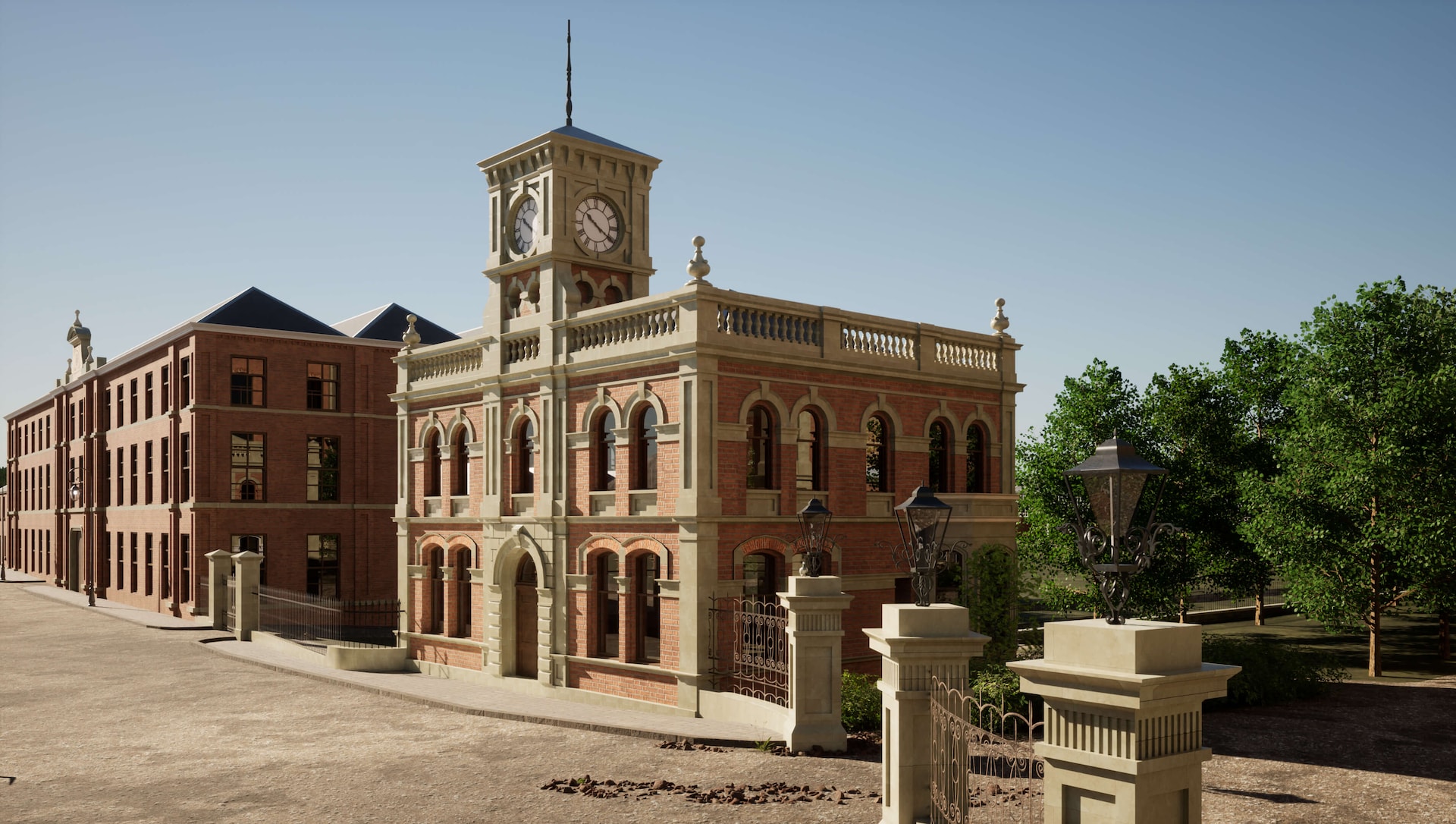 Modeling was the major task on this project, taking a total of about 200 hours to complete all the architecture and landscapes. The terrain was modeled using five-meter contour topography maps, which were meshed together in SketchUp Pro. The buildings were modeled fully in SketchUp with all the other assets from the Quixel Megascans libraries included in Twinmotion, aside from a few free 3D car models. 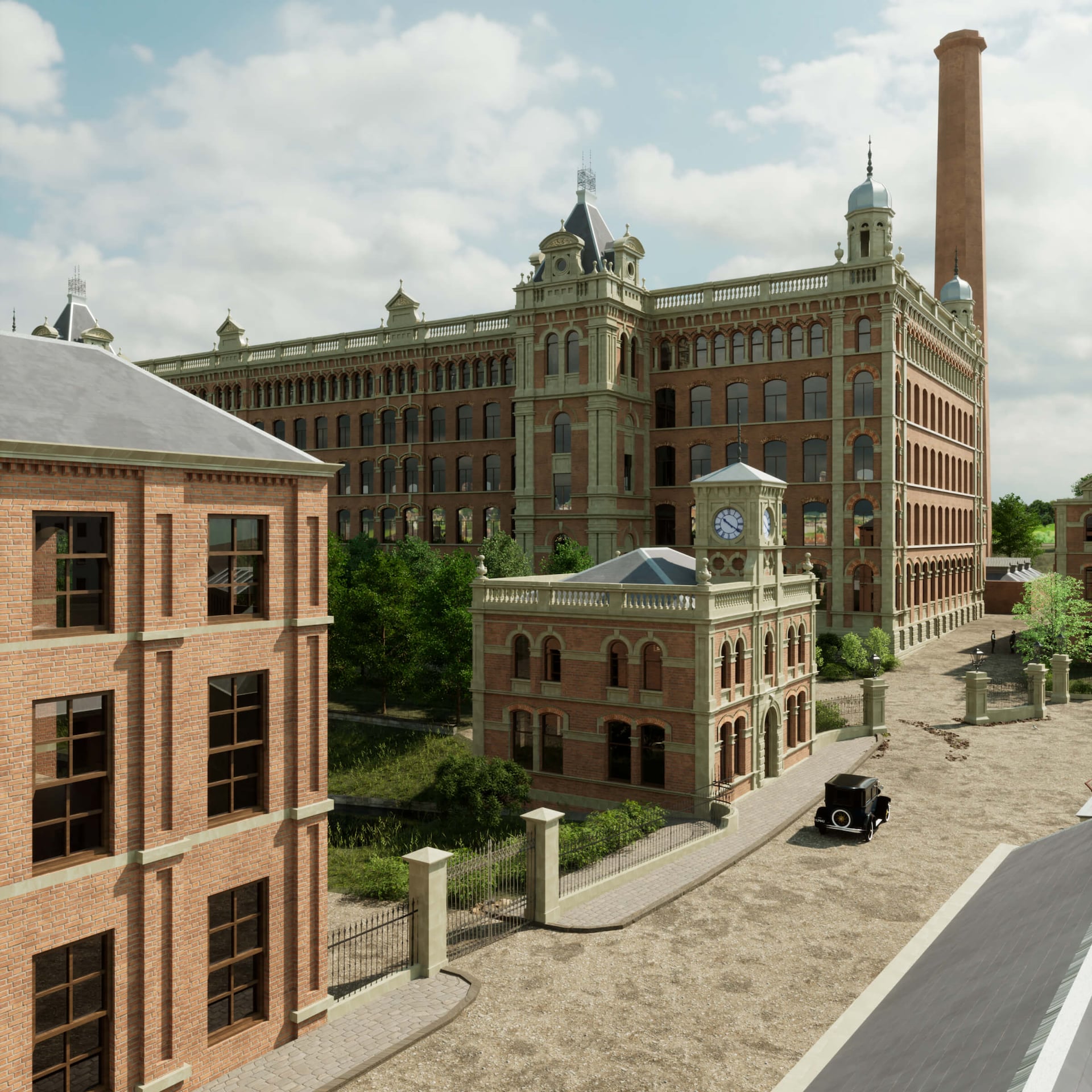 Image courtesy of Cameron Swanson
For the building modeling, Cameron developed an efficient workflow; creating a master assembly in SketchUp using a 1:500 map underlay so that each building could be saved out as a separate model. “Before importing the full master assembly, I exported out individual buildings so that these would be imported as separate links. The way Twinmotion handles links made this a lot easier as I could refresh models easily after making minor adjustments.”

He then created a photogrammetry scan of the only remaining physical building to get the architectural proportions. The next step was to overlay photo textures—made up of a combination of photographs he’d taken and edited in Photoshop and the material library within Twinmotion—onto the building’s faces to trace out details, before applying some generic SketchUp textures.

The final stage was to import the separate models into Twinmotion using the same coordinate system. In taking this approach, he could easily reload the links when he made any changes to the SketchUp models. “I’d then set up a scene in Twinmotion by adding in trees, 3D assets, and reapplied new textures from the Twinmotion library,” explains Cameron, “Then I created some new seamless textures from photographs in Adobe Photoshop and imported these into the Twinmotion User Library.” 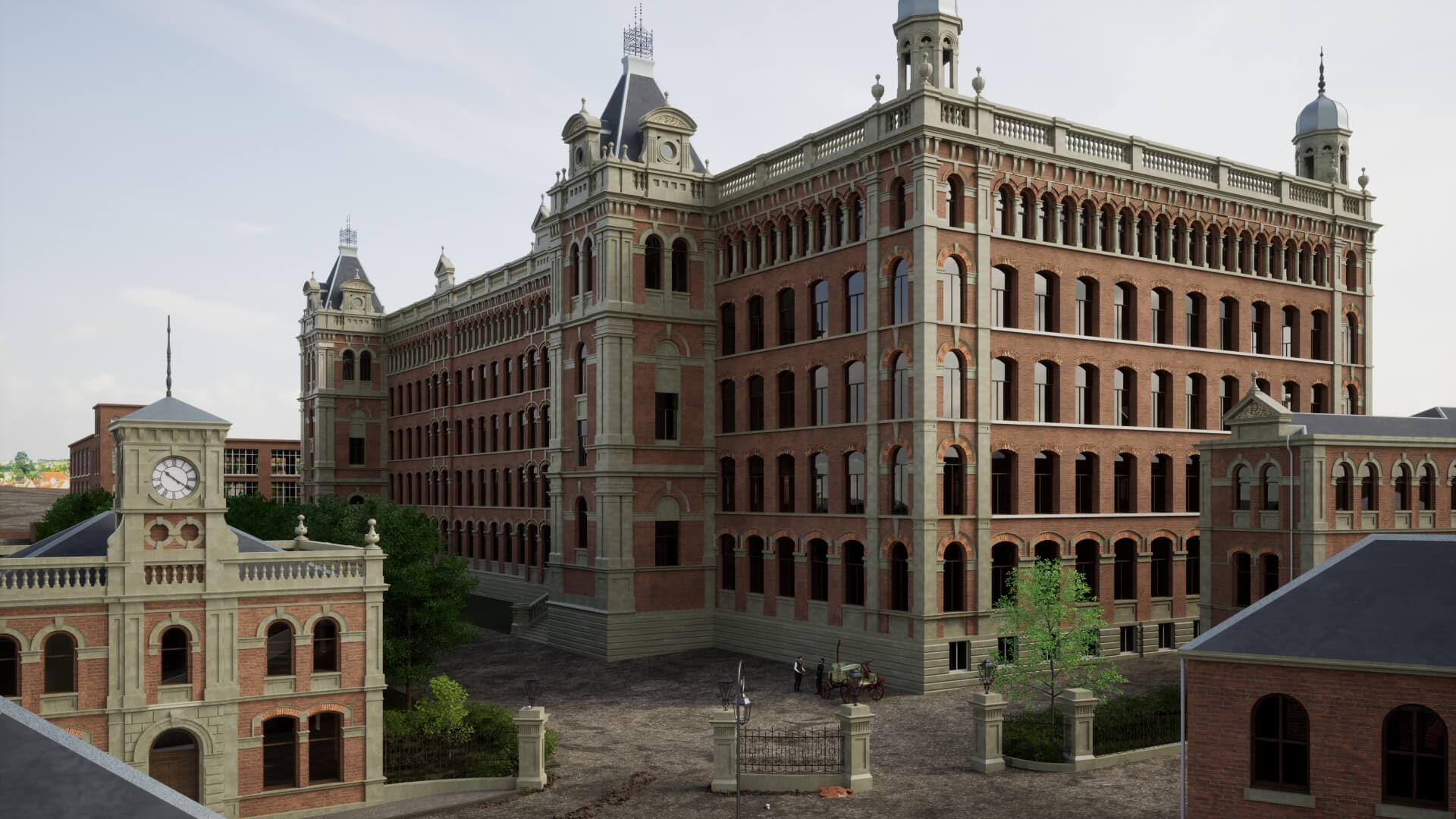 When it came to rendering, Cameron relished using the ray-tracing feature in Twinmotion to create a deep level of photorealism. “I have enjoyed delving into these light settings and tweaking the scenes through changing the sky domes, sun position and exposure levels”, he says. “The trees and vegetation within the Twinmotion library have also been extremely important in bringing life to the scenes. The real-time rendering really sped up the process of tweaking materials and light settings to make the scene as realistic as possible.” 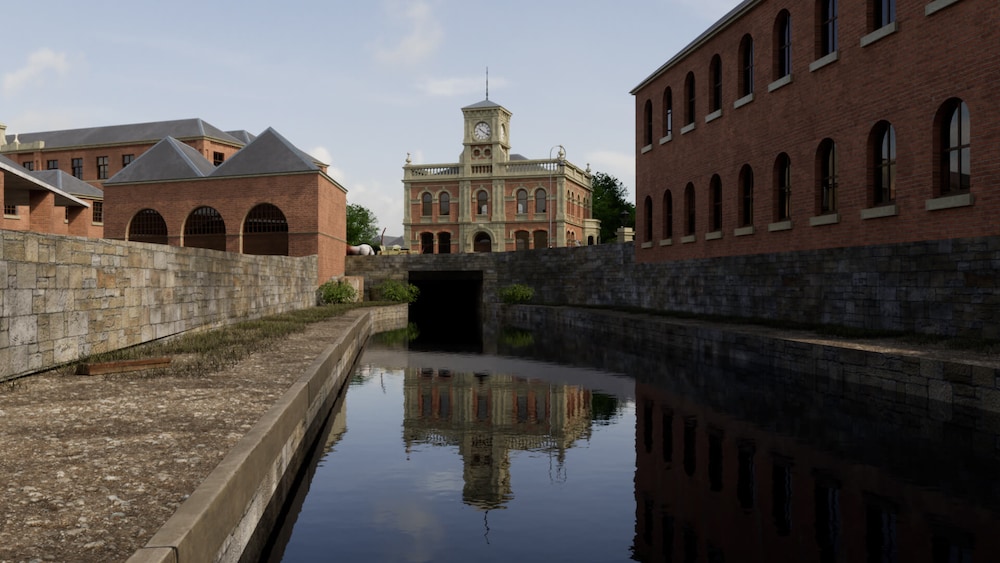 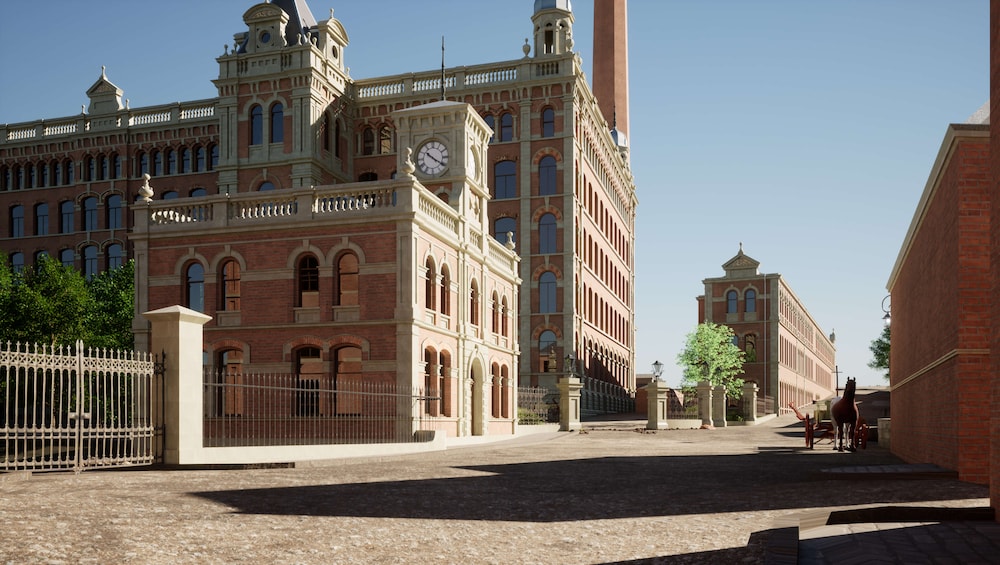 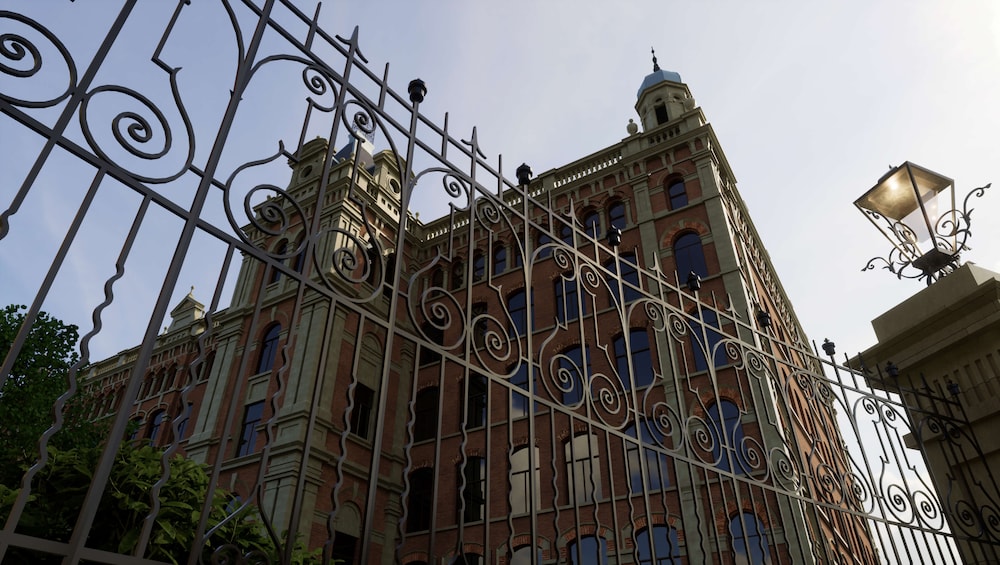 Other notable features that aided Cameron in this project were the PBR textures within the library, in particular, some of the 8K textures available through the Quixel Megascans library. “Being able to adjust all of these things through a simple user interface gave me the ability to quickly create video clips of my scene,” he says.

Cameron’s still working on this project and plans to develop a virtual reality version that will be used as an educational tool in schools and as a means to rekindle memories for those that worked at the mills. “The reaction so far from the community has been overwhelmingly positive, with many saying that the reconstruction has brought a tear to their eye,” says Cameron. “I hope to keep developing the model to allow the story of the Ferguslie Thread Works to be told, from its foundation in 1826 to today where a housing estate covers most of the site.”

We can’t wait to see what journey Cameron’s next visualization will lead us on.

If you’d like to try your hand using Twinmotion to create immersive experiences, simply download the free trial today. It’s free to use for as long as you need, or you can upgrade to the full-featured version when you are ready to get down to business.