An award-winner for its innovation, global architecture, engineering, and construction practice CannonDesign is adopting Twinmotion as its go-to solution for visualization projects, and discovering the benefits of real-time design reviews in the process. 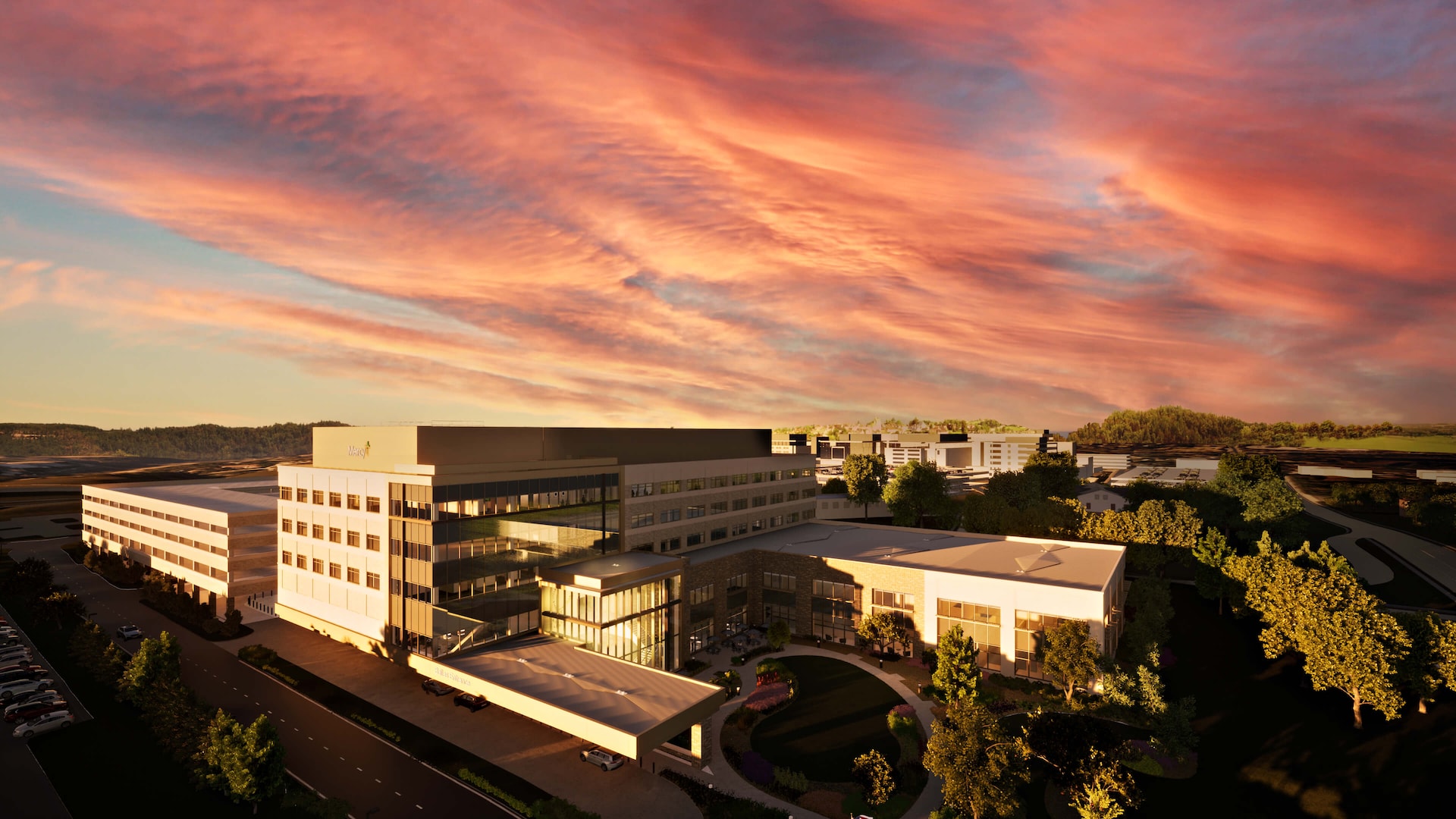 Image courtesy of CannonDesign
With a 76-year long history and over 20 offices across the USA, Canada, and India, global architecture, engineering, and construction practice CannonDesign is no new kid on the block. But that doesn’t mean the company is old-school in its thinking. In fact, it’s been recognized as one of the most innovative design firms in North America by Fast Company three times in the last five years.

CannonDesign prides itself on helping organizations and the people and communities they serve flourish through a design approach they call ‘Living-Centered Design’. They apply this ethos to projects in a wide range of markets, including health, civic, sports, science and technology, education, commercial, and hospitality.

One such recent project is The Mercy Ballas Multispecialty Center in Creve Coeur, MO, right outside St. Louis. Designed and managed by award-winning CannonDesign architect Allison Méndez, this 273,000 sq. ft, five-story outpatient facility’s goal is to provide the patient experience of the future. It’s currently under construction, having broken ground in February. 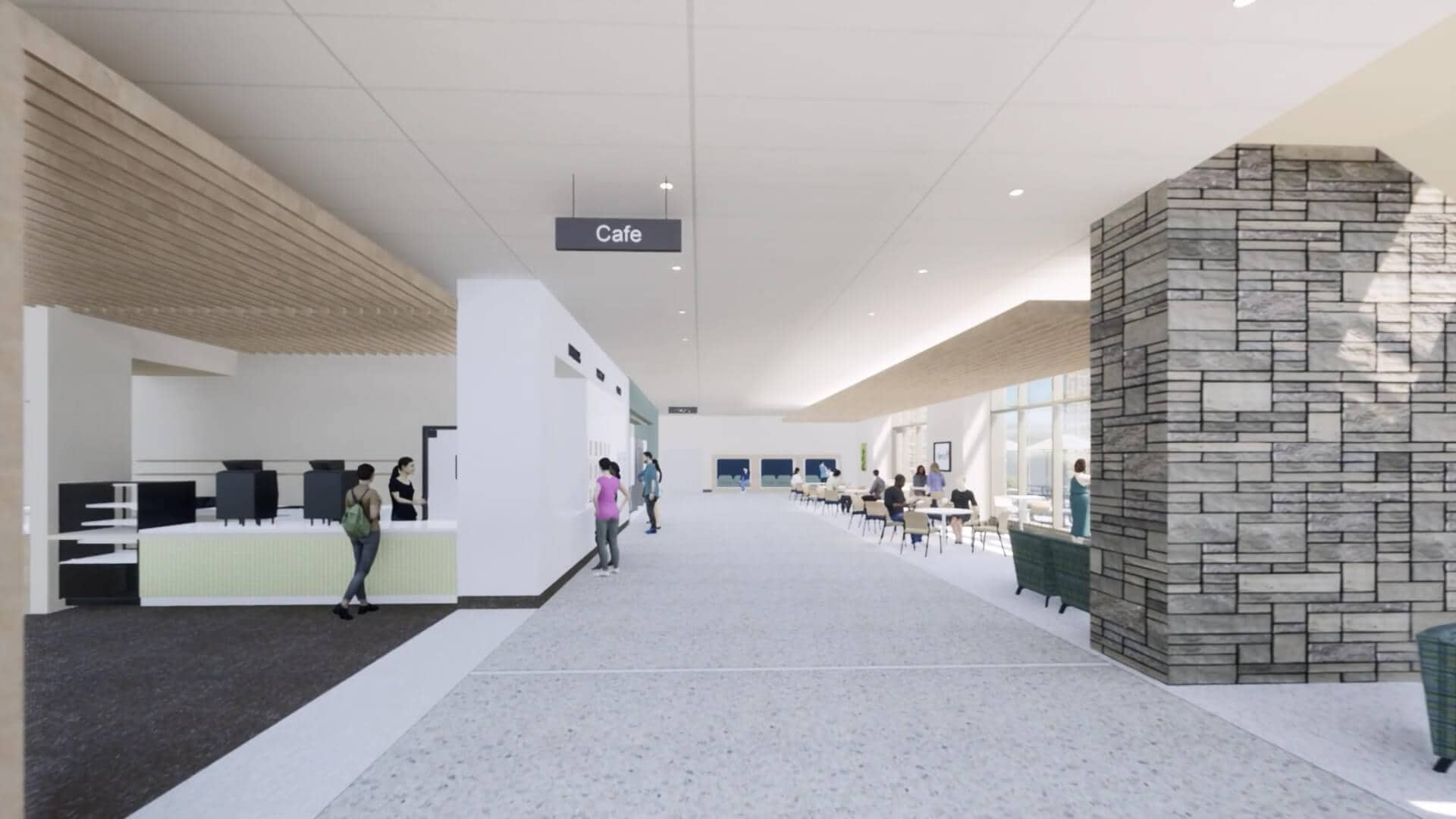 To visualize the project, the client asked for a lengthy feature animation to include both interior and exterior shots of the extensive site, including landscaping. With a very limited schedule, high expectations for the quality of lighting and finishes, and just one junior visualization specialist assigned to the job, CannonDesign’s Director of Visualization Ernesto Pacheco had his work cut out. He immediately turned to Twinmotion, which the company had used on a number of earlier long animations. 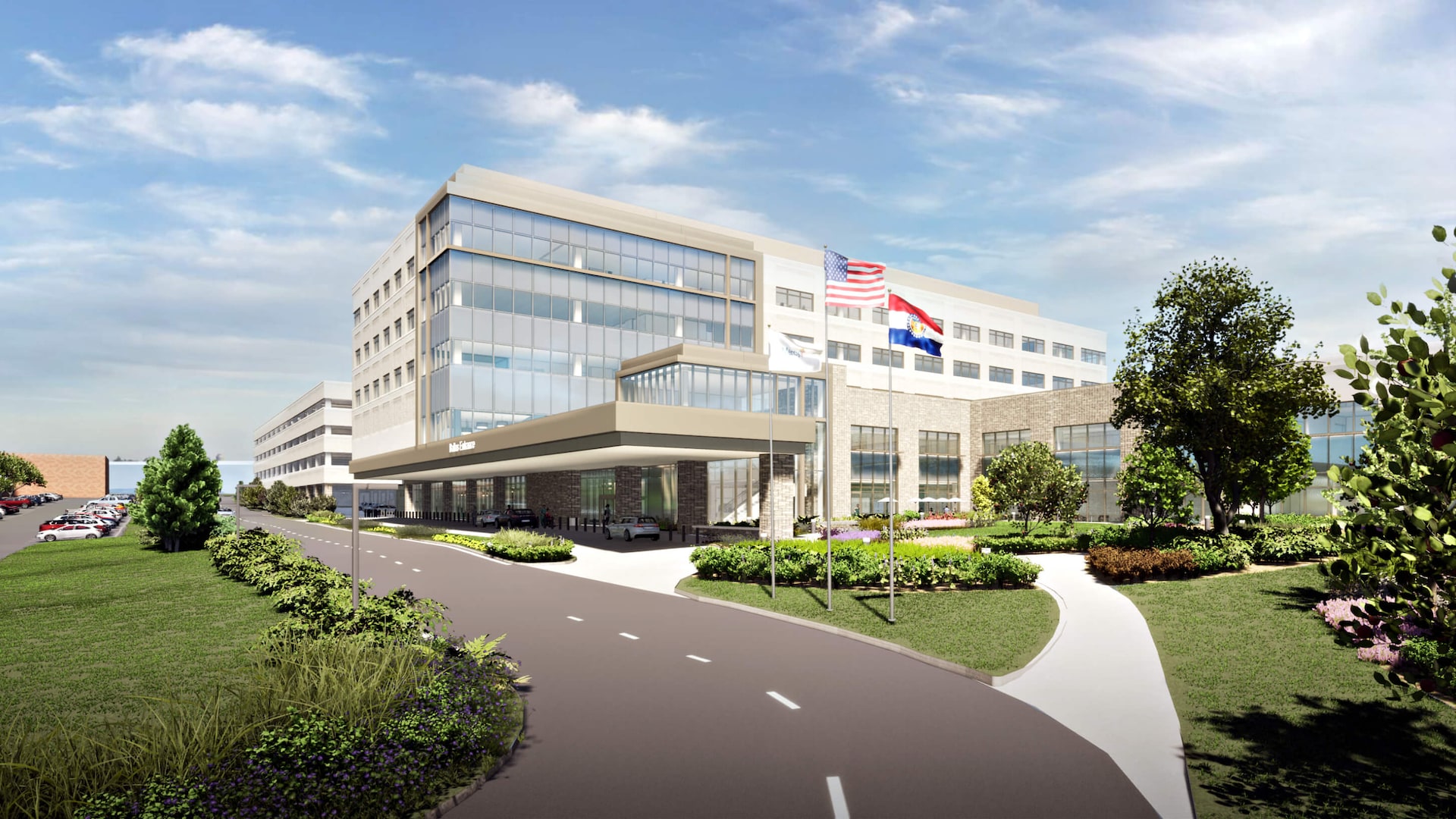 Image courtesy of CannonDesign
Ricardo Orfila, the junior visualization specialist, had only just started to focus on visualization work—in fact, this was only the talented designer’s second animation. Fortunately, he’d got up to speed on Twinmotion extremely quickly.

“Twinmotion is super easy to use,” says Pacheco. “It's amazing when somebody opens Twinmotion and starts playing with it—you can see the smile on their faces. I was very impressed at how easy it was for Ricardo to pick it up and actually lead an animation project all by himself.”

With Orfila working full time on putting together the Twinmotion project from Rhino files provided by the design team,  took on a part-time art direction role, focusing on camera paths, custom physically based material creation, and video editing and compositing. 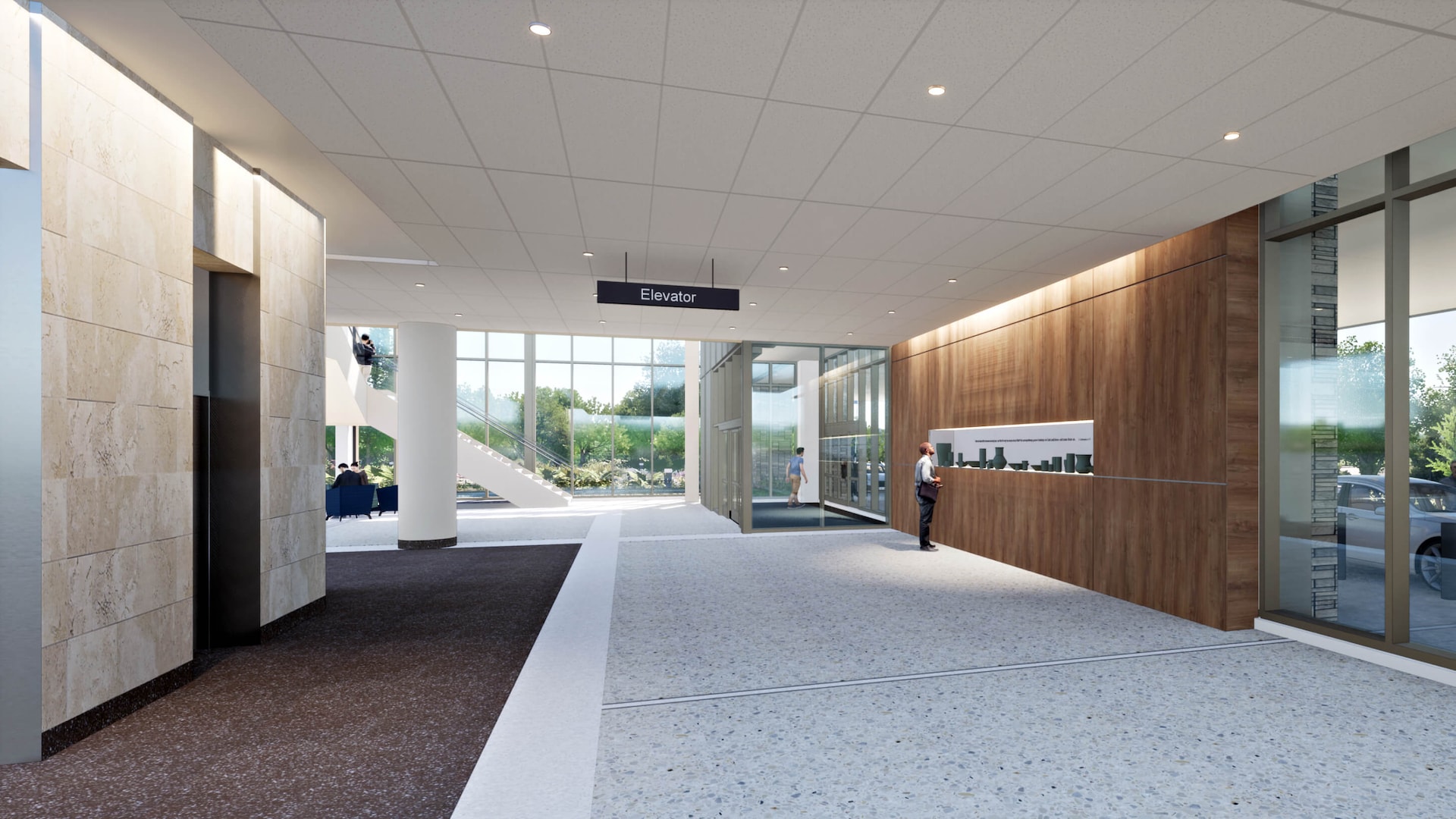 Image courtesy of CannonDesign
Initially working in Twinmotion 2020, Orfila was importing the Rhino files via FBX, which resulted in very large files, long load and save times, and slower viewport performance. But with the arrival of Twinmotion 2021 came a new Datasmith Exporter plugin for Rhino.

“That improved all those initial issues we encountered, making our files more streamlined and responsive,” says Pacheco. “It definitely made our workflow 50 percent quicker.”

Using the plugin, you can either import the Datasmith file into Twinmotion, or directly link the two packages so that edits made in Rhino are reflected in Twinmotion in a nondestructive manner. It’s even possible to synchronize data from multiple sources at once. Datasmith Exporter plugins with Direct Link functionality are also available for Archicad, Revit, RIKCAD, and SketchUp Pro, while the same functionality is built right into Vectorworks.

Making changes on the fly during live design reviews with stakeholders

The ability to iterate quickly and easily in this way came in handy on the Mercy Hospital project, with the design still being worked on when the visualization project started. In fact, the team was able to make changes on the fly during design review sessions, something which not only saved a lot of time, but also proved a very satisfying experience for both designers and clients.

“One of the things that we love about Twinmotion is how easy it is to just open the file and jump on a virtual call with the client or the design team,” says Pacheco. “We can move things around, change materials, add assets, and everything happens in real time.” 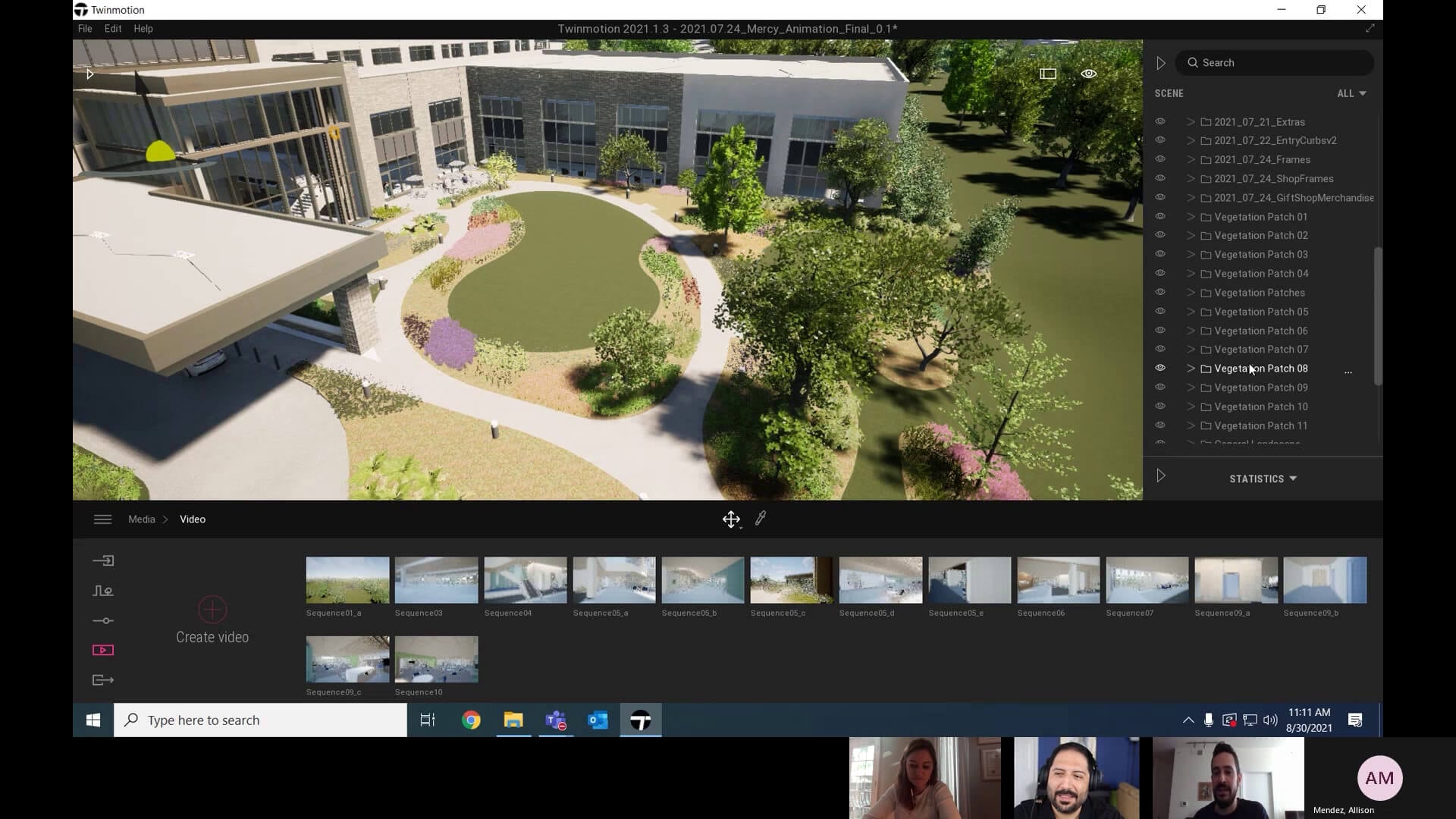 Image courtesy of CannonDesign
“This type of live design review has significantly expedited our workflow,” he continues. “It has also helped to prevent miscommunication between stakeholders that can lead to mistakes. It’s priceless for our visualization processes like animation and VR, because it gives our designers and clients the peace of mind to know that ‘what they see is what they will get'—no more second guessing. It creates this organic interaction and the whole experience becomes more natural.”

Twinmotion comes with a comprehensive library of entourage—over 10,000 2D and 3D assets covering everything from furniture and vehicles to trees with leaves that blow in the wind, animated humans, and even doors that automatically open when approached—which the team exploited extensively for the Mercy Hospital project. The library includes Quixel Megascans, a large and ever-growing collection of premium-quality scanned assets. 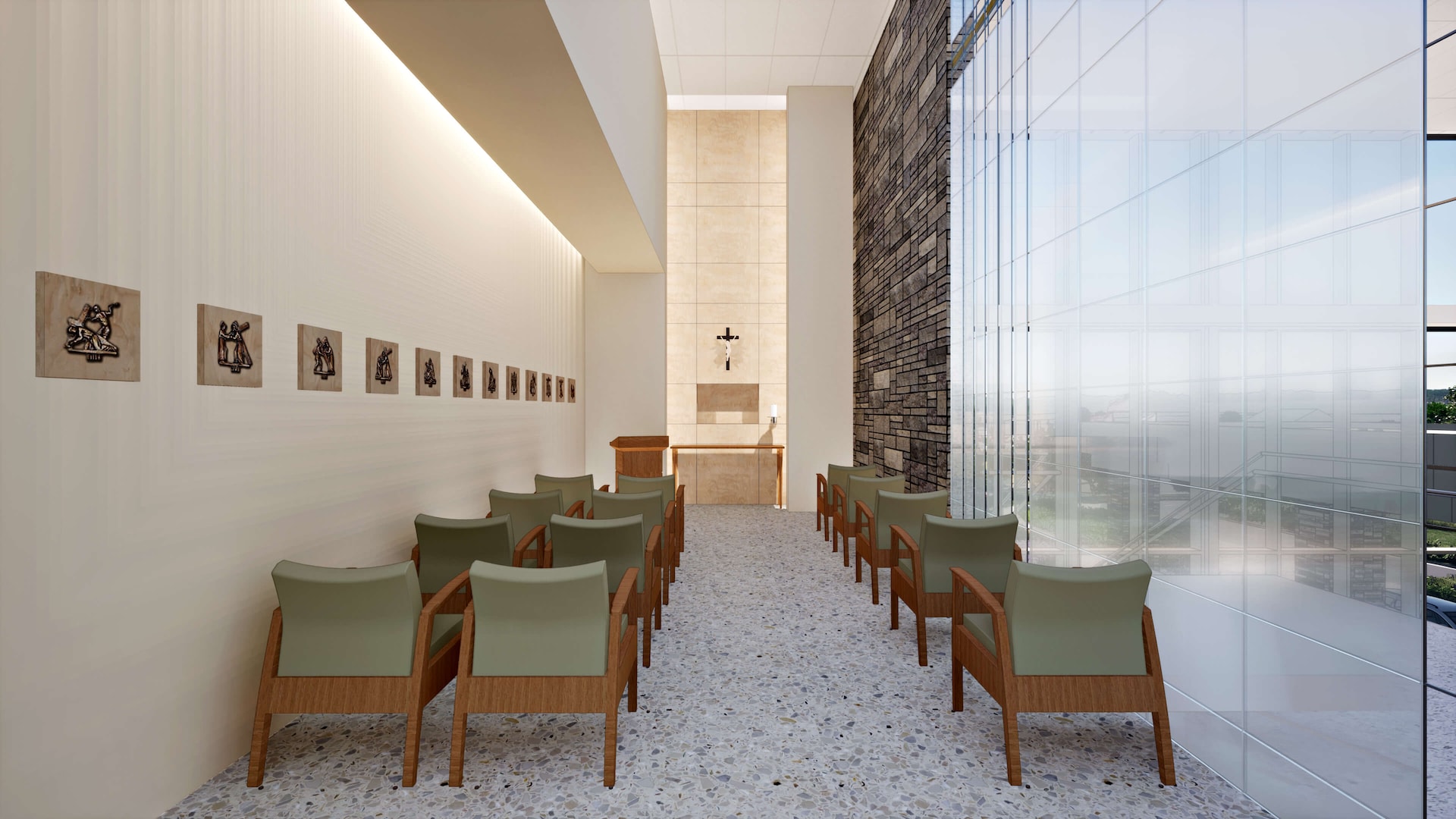 Image courtesy of CannonDesign
“Having access to highly detailed entourage for real-time visualization makes us feel like we are living in the future!” says Pacheco. “We are very excited to see the Quixel Megascan library continue to grow. It has definitely saved a lot of our time on just simply browsing for high-quality content.”

For the exterior, the team partnered with a landscape architect, sharing the Twinmotion library with them so that they could select and refine the elements to be placed throughout the space. They also employed the Vegetation Paint and Vegetation Scatter tools to quickly and easily populate the large site with plants. One of the unique aspects of Twinmotion vegetation is that it supports the concept of growth, so you can visualize how a site will mature over time.

Sharing the interactive presentation with anyone, anywhere via Twinmotion Cloud

In earlier versions of Twinmotion, it was possible to share an interactive presentation with a user by creating a packaged executable. While this meant that the file could be shared with anyone without needing access to Twinmotion, file sizes were large, and the viewer required a high-powered computer.

The recent introduction of Twinmotion Cloud has changed all that. Now, presentations are exported to the cloud with a single click, and can be shared with stakeholders via a simple web link, without the need to download anything. 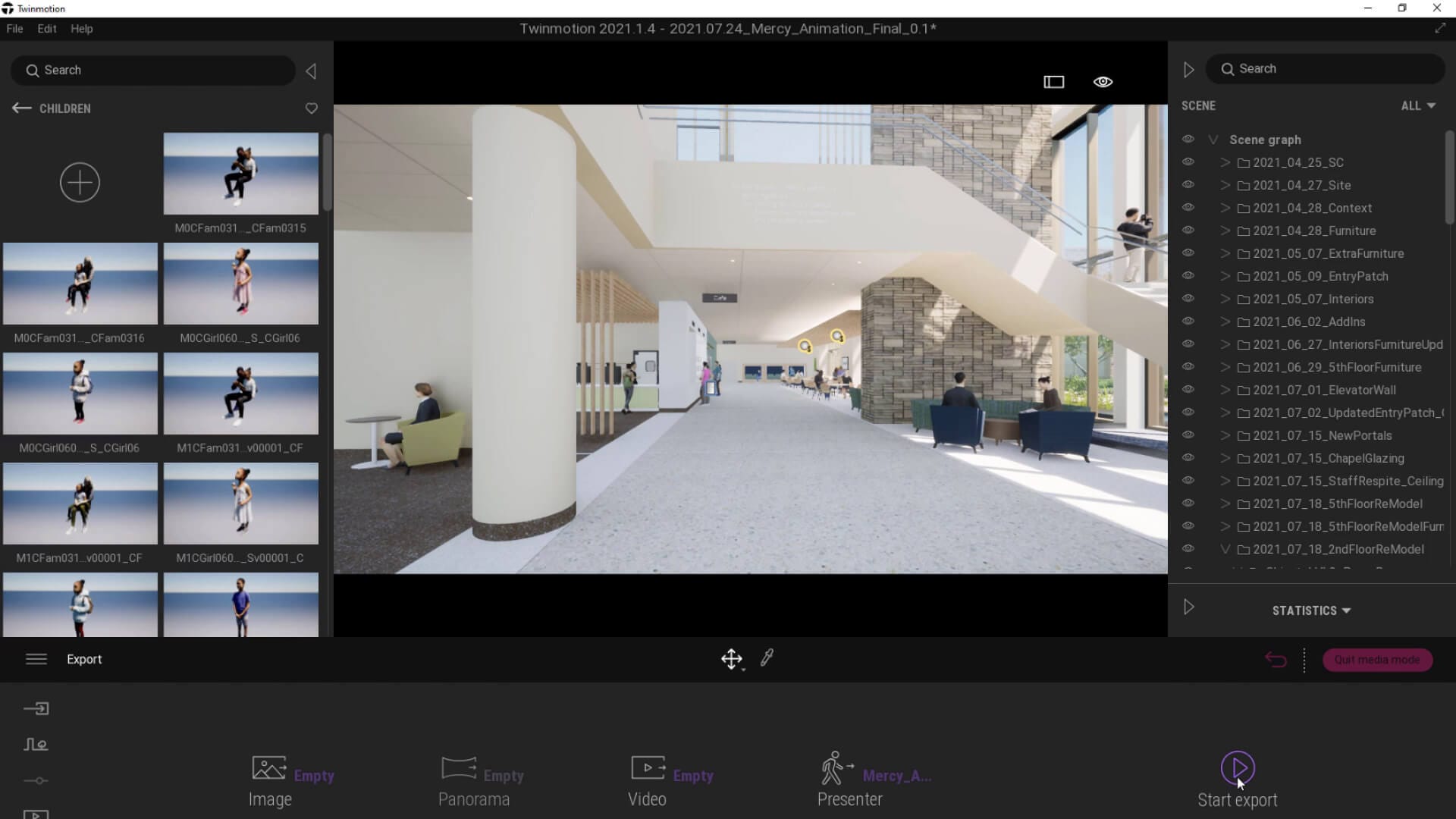 Image courtesy of CannonDesign
“Designers can just send a link that the client can open on their laptop or a mobile device,” says Pacheco. “They don't require dedicated hardware with a powerful GPU.”

Taking Twinmotion projects to another level in Unreal Engine

However, he’s also interested in its connectivity to Unreal Engine. The power and sophistication of that toolset, which the company has been using for five years, enables the visualization team to take projects started in Twinmotion to another level of complexity.

“I’m looking forward to Unreal Engine 5 and new features like Lumen and Nanite, which will introduce new workflows to fast-track some of the steps one has to think about when looking into producing higher-quality outputs,” he says. “The fact that Twinmotion and Unreal Engine have a bridge that connects them means that we can rest assured that we can continue to utilize the same datasets if there are needs for more complex solutions in any project.”

Pacheco is one of the presenters at the upcoming Build: Architecture 2021 event on November 2, where he’ll be joined by speakers from Zaha Hadid Architects, HOK, Foster + Partners, and more, who’ll share how they’re spearheading innovative real-time projects in the AEC space. Visit our event page to find out more and save your place.